skip to main | skip to sidebar

Erie Isle: Haunted Island Roleplay, one of Second Life’s® most popular roleplay destinations and innovator in the genre, announces the completion of the transfer of ownership to long-time Erie Isle player, Garaan Fitzroy. 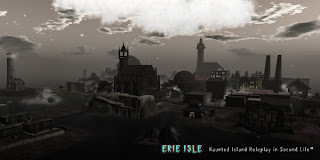 Under Marjeta’s leadership, the Erie players and staff quickly brought Erie Isle to the forefront of SL roleplay. Providing a well developed mythos and environment for roleplay was at the core of Colleen Marjeta’s philosophy, but she also encouraged innovative ways to introduce Erie to broader audiences. Erie Isle has hosted mixed events for players and non-player guest like movies, plays, and concerts at the Phantom Theatre, movie screenings with real life filmmakers present to interact with SL residents, and kept a presence in SL media. This approach helped Erie Isle to grow to more than two thousand member players and aided it with being voted “Number One Place for Roleplay” in the Second Life Residents Choice Awards.

Marjeta’s decision to depart from an ownership role was a purely practical one, and based on her concern for Erie Isle and its future. Despite her deep affection for the project, it’s players, and it’s great stories, first life commitments were preventing Colleen from giving Erie the attention it needs and deserves. Garaan Fitzroy’s stepping forward is truly fortuitous for Erie Isle and the fact that he’s been actively involved all along gives Marjeta peace of mind that Erie will continue to grow and develop.

Fitzroy acknowledges the challenge with an open mind. He says: “I have a lot to live up to…I had previously been a staff member around when Erie came into existence, but I had not ever considered owning my own RP sim mainly because I had found my home in Erie”. Garaan Fitzroy is excited to take on this new role and assures Erie Isle players that the roleplay they’ve helped evolve will be preserved. “Erie has a rich back-story, from both players as well as the one originally created. I am just going to put the spotlight back on it, and let the players have fun”.

Erie Isle staff can expect to assist Fitzroy in getting an administrative overview, but outside of that, the transition is expected to be smooth and will not interrupt roleplay. Erie Isle owes its success to the great players and staff that call it home. Erie Isle is here to stay and will continue to provide a unique, fun, and innovative place for roleplay in Second Life.
Posted by Jura Shepherd at 8:08 PM No comments: 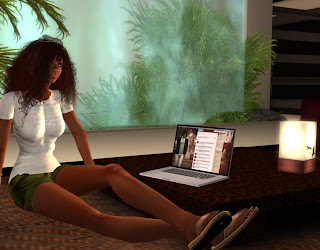 Second Lifers reading this will no doubt give a collective nod when I say: SL still has a perception problem in the mainstream. It comes with the territory of being the front line in a walled-off and developing platform. We know we are a complex society with our own economy, media, arts, and so on, but it's not realistic to expect people from the outside world to know SL as we do unless we make the effort. In-world, we may compete with one another but in SL's satellite media economy, we are all ambassadors by default.

I've never made bones about the fact that I am an immersionist and for all practical purposes, I am born of, and exist entirely in a virtual environment. It is not only for my own enjoyment of SL but a crucial matter of discipline as I learn ways to promote within our world. With that said,there's no way I can tell the outside world about all of the creative, innovative, and dedicated people within SL without meeting them at the digital shoreline of social media.

In a recent blog post by the London based integrated marketing firm, The Crocodile, the value of bridging worlds is made clear as a bell. Excerpted from the post:

Twitter has helped open up new opportunities in one of 3Dconnexion’s existing markets, Second Life. Thanks to a connection made on Twitter 3Dconnexion has embarked on an ‘in-world’ promotional tour of Second Life communities and events and at no extra cost to the company. The touring exhibition has been designed and built by Jura Shepherd, a publicist and promoter inside Second Life who works with in-world businesses and communities and was keen to work with a recognised real life brand. The event will showcase 3Dconnexion 3D mice to thousands of Second Life residents who will be offered special discounts and invited to enter prize draws.

Of course I'm delighted with the mention but there is a bigger point to be made: Greater marketing minds than mine are also at the digital shoreline because that's where the people are. How we as ambassadors represent ourselves (and SL) there most certainly gets noticed.

It benefits us all when the outside world has a better understanding of how sophisticated SL is internally and off-world social media is an ideal environment to do it in. Social media has a disarming quality about it that fosters conversations. Beyond that, and maybe more importantly, your timeline is a quick and easy for other to see if you are serious, accessible, and if you know what you are talking about. That's not to say it shouldn't be fun because it certainly can be. I'm only suggesting with a gentle nudge that we, as avatars are the ones putting humanity into the statistics and news releases in the SL hype stream.

As far as I'm concerned, Linden Labs can handle sending press releases to real world media outlets. They have the branded authority to speak about the platform and be taken seriously. It's their job. I've tried with minimal success but my guess is that most of what I've sent has been read like it was the ramblings of a crazy person. I'm actually ok with that. Our embassy as representatives of SL is in social media and I'm convinced that we'll meet the mainstream there.
Posted by Jura Shepherd at 8:40 AM No comments:

Popular SL musician, Winston Ackland has release his second CD for the RPM Challenge. "Annabel Waiting" is a collection of 10 original songs written, performed, and produced by Winston in his Chicago studio and true to RPM rules, it was all done in the month of February.

For those familiar with Winston's in-world performances, Annabel Waiting is not the unplugged style you've become familiar with. The CD is a full studio production with multi-instrumental tracks (all performed by Winston) and provides an opportunity to hear him in a totally different way. Those not familiar with Winston in SL may have heard his uneasy lounge rendition of "Lithium" by Nirvana in Fox Film's "Marley and Me" movie by his RL avatar, Bruce Lash.

Annabel Waiting combines Winston profound respect for vintage pop with perspective as a modern plugged-in indie musician. From his sarcastic swipe disguised as a love letter to Sarah Palin (Track 2 Post-Fact), to the rousing road trip feel of "I got it Right: (Track 9), Winston serves up 10 memorable with wide appeal.

You can hear "Annabel Waiting" in it's entirety at these links:
In-World Listening Station- http://slurl.com/secondlife/Jacquerie/233/19/501
On the web- http://brucelash.bandcamp.com/album/annabel-waiting
Posted by Jura Shepherd at 12:15 PM No comments:

Season's greeting to our friends. You have all helped us grow and learn and we appreciate your support. It has been our pleasure to grow together with you and we look forward to an exciting 2010. 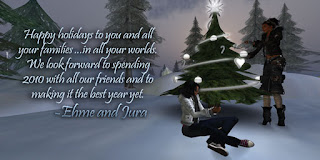 Posted by Jura Shepherd at 8:03 AM No comments:

Todd Borst Throws In The Towel

Back in June I did a brief posting to link people to http://virtualworldbusiness.com/'s VirtualWorldBusiness.com I was really impressed with Todd's ability to communicate his SL business experience in a generous, practical and accessible way.

As usual I'm behind the times but I wanted to direct people to Todd's site again because apparently he's decided to call it quits and the website will close when the domain expires. Citing unspecified issues with Lindens in his last post, Todd says SL has become difficult for him to enjoy. I totally respect this and won't feign sadness because we don't really know each other.

What I will do, in the pragmatic spirit of Todd's blog and hopefully mine, is recommend that people go and absorb the good info there before it disappears.

Posted by Jura Shepherd at 7:52 AM No comments:

Posted using ShareThis
Posted by Jura Shepherd at 4:21 AM 2 comments:

METAHYPE Gets A New Look 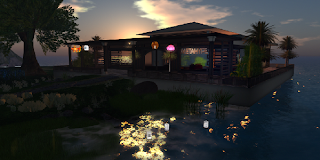 Hi all. Just a quick picture post. I've been working on it it when I can but it's finally coming together. There's still lots to do like: interior decorating, the self-help info and other information. Anyway, stop by and have a look or just chill out in the moonlight by the water. Come say hi!
Posted by Jura Shepherd at 8:42 AM 1 comment: